What is the pemmican?

Pemmican is a blend of tallow (animal fat similar to lard or lard), dried meat and dried berries that is used as a source of protein.

It was the indigenous peoples of North America who invented the pemmican.

How is it produced?

Dried meat often comes from large game meat such as bison, deer or elk, but the use of salmon or duck is not uncommon.

The meat is cut into thin slices and dried over low heat or in the hot sun, until it is hard and crumbly. This thin and brittle flesh in the Cree language is called pânsâwân.

The pânsâwân, spread on a tanned animal skin pinned to the ground, was beaten or ground between two large stones until it was transformed into very small pieces, almost like a powder in its consistency. 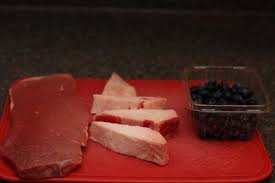 The mixture was packaged in rawhide bags for storage where it cooled and then hardened into pemmican.

How long does it last?

At room temperature, pemmican can generally last up to five years, but there are legends of cool cellars kept pemmican for over a decade. Vacuum packed it can remain edible even for a century.

It is estimated that, on average, the carcass of each buffalo will produce enough pemmican to fill a bag.

Does it remind you of anything?

It takes more or less 2 kg of meat to produce 0.5 kg of dried meat.

A sack of pemmican or taureaux weighed around 43 kg and contained between 21 kg of pounded dried meat and 21 kg of fat and berries.

They were known as fin taureaux, taureaux grand and taureaux à grains depending on the recipe.

How do you eat pemmican?

As it is it can be a protein snack. There are two traditional ways of cooking pemmican: rubaboo, a kind of stew, and rechaud, which involves frying. 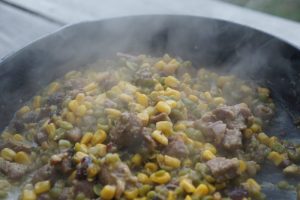 Europeans involved in the fur trade and later by Arctic and Antarctic explorers used pemmican as a high protein food.