The importance of the pemmican

Pemmican was the essential source of protein for all North American explorers and leather traders until the end of the 19th century.

Fur traders in Canada did not have time to farm the land during the short season when lakes and rivers were free of ice. They had to carry everything they needed for survival if the distance traveled was too great to be replenished along the way.

Their main food was dried peas or beans, sea biscuits and salted pork. In the Great Lakes some corn and wild rice could be recovered locally.

The pemmican trade in history

When the fur trade reached the Winnipeg area, the pemmican trade developed.

The traders were people of mixed origins known as Métis. They went to the prairies southwest of the Red River, hunting bison and producing pemmican. Eventually they returned north to trade the pemmican at the Northwest Company posts. The packs of pemmican were then shipped north and stored at the main filling stations of the fur traders. For these people, the pemmican trade was just as important a source of income as the fur trade was for the indigenous peoples further north.

The history of the pemmican war

The pemmican was so important that, in 1814, Governor Miles Macdonell started the Pemmican War with the Métis when he passed the short Pemmican proclamation, which banned the export of pemmican from the Red River colony. It was not a real war, but rather a series of skirmishes that ended in 1821 with the merger of the two companies that traded fur in Europe: the Hudson’s Bay Company (HBC) and the North West Company (NWC).

The pemmican and the explorations

Alexander Mackenzie relied on the pemmican for his 1793 expedition across Canada to the Pacific.

North Pole explorer Robert Peary used the pemmican on all three of his expeditions, from 1886 to 1909, for both his men and his dogs.

Members of Ernest Shackleton’s 1914-1916 Antarctic expedition resorted to eating pemmican intended for sled dogs when they got stuck on ice for the winter.

The “Emergency Ration” supplied to British soldiers in the Second Boer War in 1889 consisted of 4 oz. of pemmican and q4 oz. of cocoa mass.

During the Second Boer War (1899-1902), the British troops were supplied with the ration of pemmican. 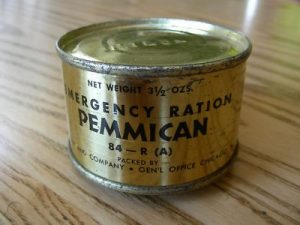 This ration was kept in two small boxes that were fastened inside the soldiers’ belts. It was the ration to be used only as a last resort.

American adventurer Frederick Russell Burnham ordered each scout to carry the pemmican when he served as scout leader for the British army in South Africa.

The expiration of the pemmican

In 2019, a Youtuber, Steve Thomas, ate the pemmican of a perfectly preserved 1906 US Army Emergency Ration Pack. The footage was released the following year on March 7, 2020.