The Borts of the Mongols, the Pastirma of the Armenians / Turks, the Musciska of the Gargano, the Coppiette of Transhumance, as regards the eastern side.

The Pemmican of the Métis, the Ch’arki of the Incas, the Charqui, the carne-de-sol and the chalona of South America, the modern Jerky of North America.

In South Africa we finally told the story of Biltong and Bokkoms. 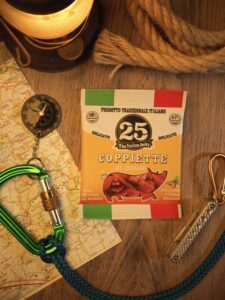 The points in common are:

The Incas used llama or alpaca meat and cold drying.

In South America we use llama, guanaco, horse, cattle, lamb with heat drying.

the Métis of North America traditionally used bison meat, deer, elk, salmon, duck. The meat was dried over a field fire, pulverized and mixed with melted tallow and berries.

The shepherds of the Gargano used meat from Goat Garganica with hot drying in winter and at room temperature in summer.

The shepherds of the Transhumance used the meat of goat, sheep, beef, horse, donkey dried on the chimney.

Mongols use dried beef, goat, horse, yak. In some cases they pulverized the meat and then stored it in linen sacks, like the Métis of North America with the Pemmican.

The Turks and Armenians used to use beef to make pastirma. They dry and then wrap the meat in a spice glaze.

Afrikaners used to wash beef, impala, oryx, eland, springbok, ostrich or mullet in vinegar and then dry it over a campfire.

Drying can take place in 4 ways:

Cold drying was typical of the Incas people, taking advantage of the Andean climate and the thermal shock between day and night.

Smoke or fireplace drying is typical of Afrikaners, shepherds or Métis. Once the animals were killed, they immediately proceeded to dry the meat by means of the burning fireplace or the campfire.

Kiln drying is a recent technological application to speed up and make jerky production safe.

While the first three processes take around 3 days to complete, using the oven reduces the process to around eight hours.

In ancient times it was stored in linen or jute bags that allowed transpiration and prevented the formation of mold.

Nowadays it can be stored under vacuum, or in a modified atmosphere in practical sachets with oxygen absorbers.